AMICI Dance Theatre Company's founder, director and principle choreographer Wolfgang Stange was born in Berlin and came to Britain in the late 1970s to train at the London Contemporary Dance School. At this time he worked with the distinguished dance expressionist Hilde Holger who became his mentor.

"Hilde taught me to recognise and value honesty on stage."
Wolfgang Stange 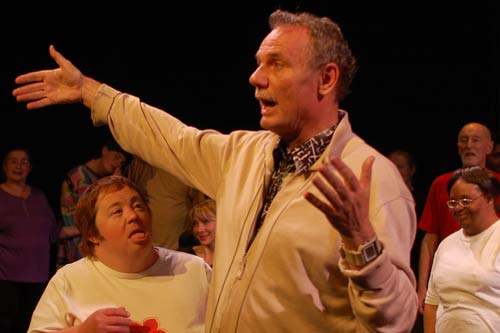 Wolfgang Stange teaching a class at The Lyric, Hammersmith 2010


He first appreciated the possibilities of dance as a therapeutic force whilst in Sri Lanka.

“I went to a Christmas party in Negombo at the Cheshire Home for the disabled. While the rest of the audience watched local school children performing, I was watching the residents of the Home - and wondered how it must feel to always be on the other side of the fence, to be excluded. That's when I decided to concentrate on investigating the possibilities of dance more carefully, perhaps making a different kind of dance theatre as a form of creative expression for people who otherwise would never have the chance to develop their artistic potential.”
Wolfgang Stange

Gina Levette who founded Shape, asked Wolfgang to run movement sessions at the long stay institution for people with severe learning difficulties Normansfield Hospital. Wolfgang's success was such that he was soon teaching classes to groups with learning and/or physical difficulties in a range of venues, sometimes including aspiring dancers without obvious disabilities. In 1980 he formed AMICI Dance Theatre Company and it made its groundbreaking debut at the London Roof Top Theatre. Wolfgang is now known internationally for his teaching methods which stress the need to share and acknowledge each other's abilities, whether disabled or not.

"Stange has a genius for directing"
Louise Levene (The Sunday Telegraph)